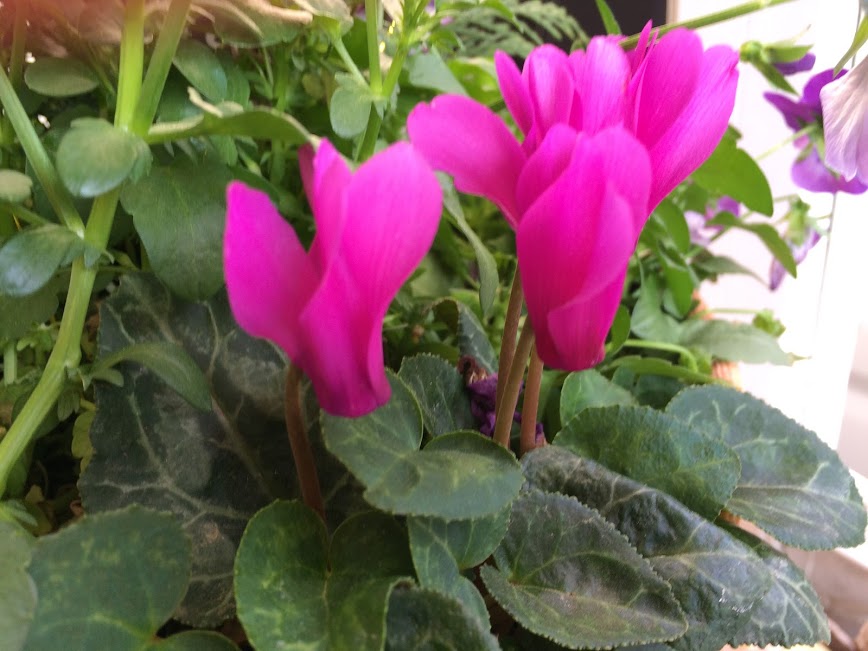 Pests that can damage the vegetable seedlings of home gardens ...

The troubled bug, the number 1 is a slug!

The seeds are sown, and the sad reality is that they will be eaten immediately afterwards while they rejoice, "Sprout has come out!"

I gess  that everyone who is a gardener has experienced.

In the daytime, slugs live in moist shades, such as grasses, stones, and pot bottoms, and at night, rely on the smell to progress from the ground to the roots of the seedlings, pass through the stems, and damage the shoots.

The slugs start taking action at around 8pm, and at 10pm they are in full bloom.

They seen in the garden are mainly slugs, about 5 to 7 cm long.

At night, they appear and crawl from the bottom of the pots and the grass, where they live, and climb up the planter surface, advance from the roots of the plants to the tops of the plants, and eat young seedlings.

Please note that those who are not good at  pictures of slugs.

Slug behavior (Nighttime activity, resting in the shade during the day)

Let's look at the slugs in action.

A slug moving forward on the stairs with its head directly below. 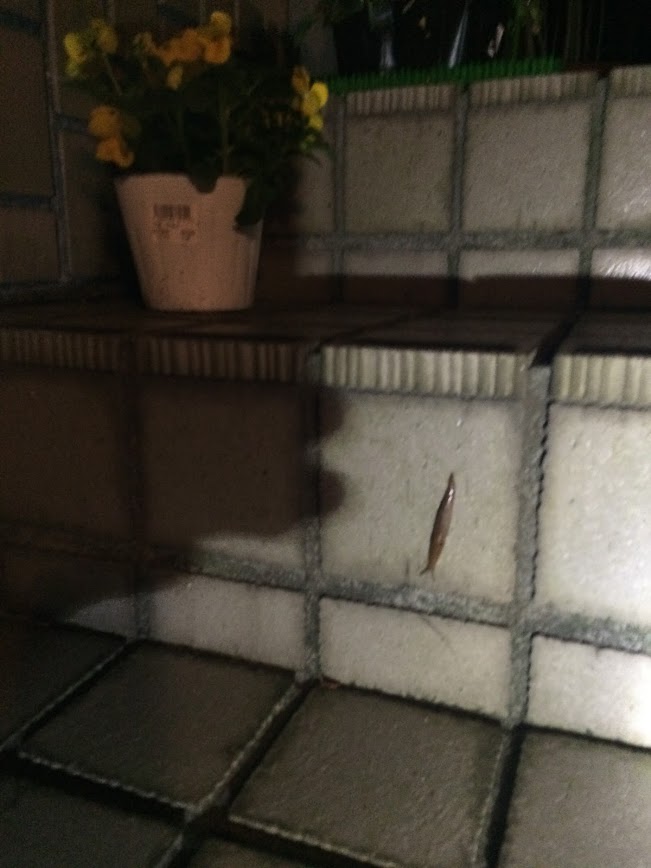 A slug heading up the stem, heading upwards, and heading for work (which damages the shoots). 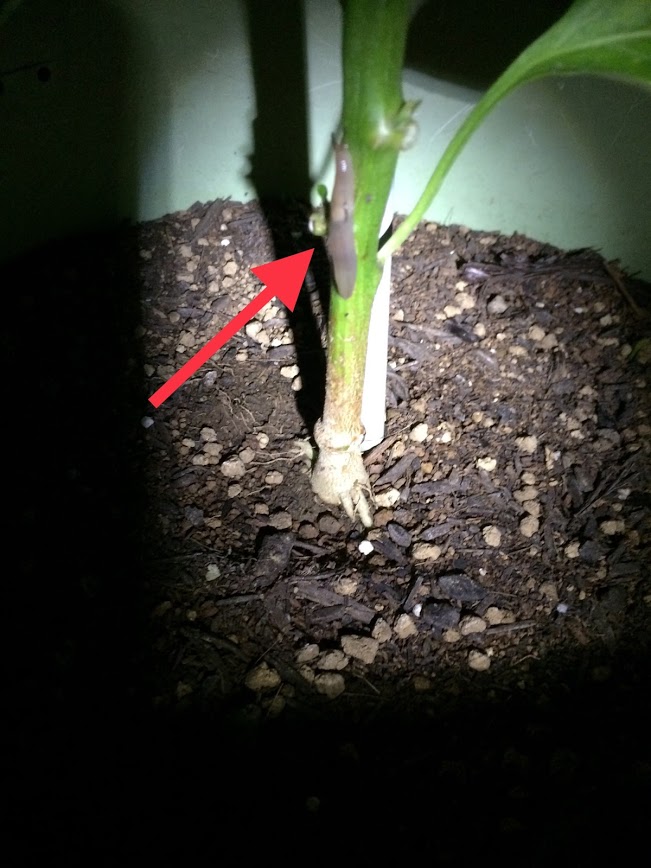 Slugs who have completed their work (spoil the sprout), travel down the stem, head down and return home. 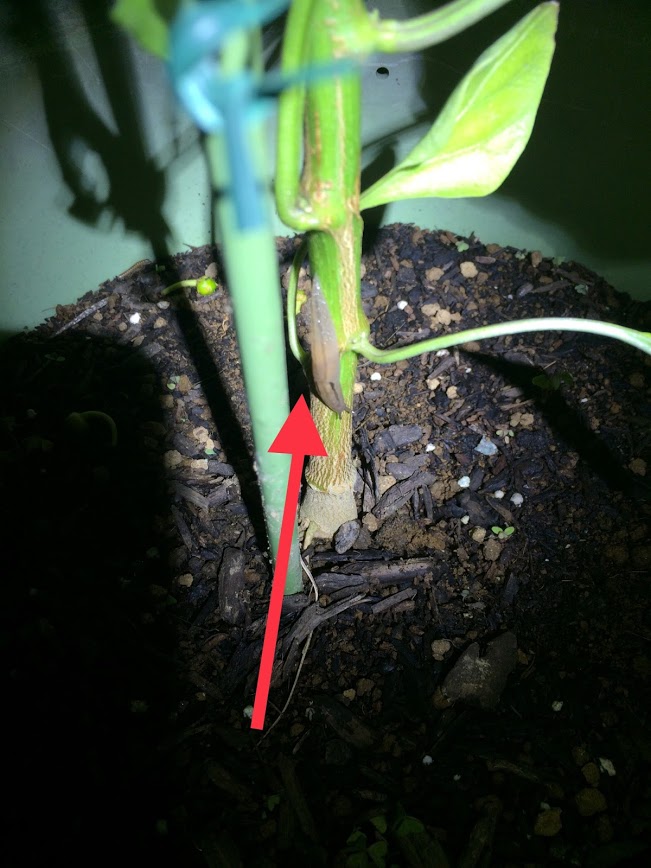 Slugs are eating now! (Green beans that have just germinated, the next day nothing remains from the root.) 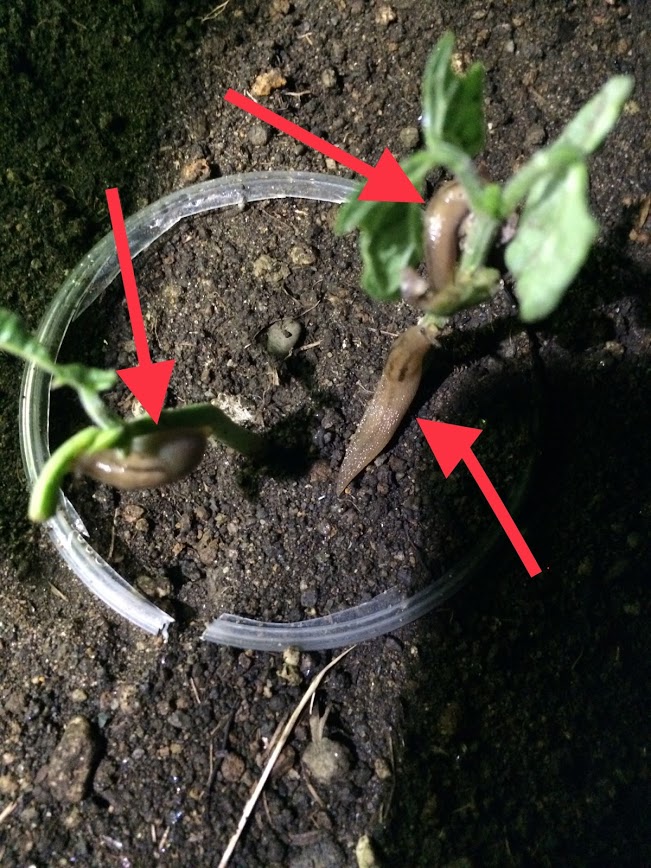 Slugs are  eating with great momentum. 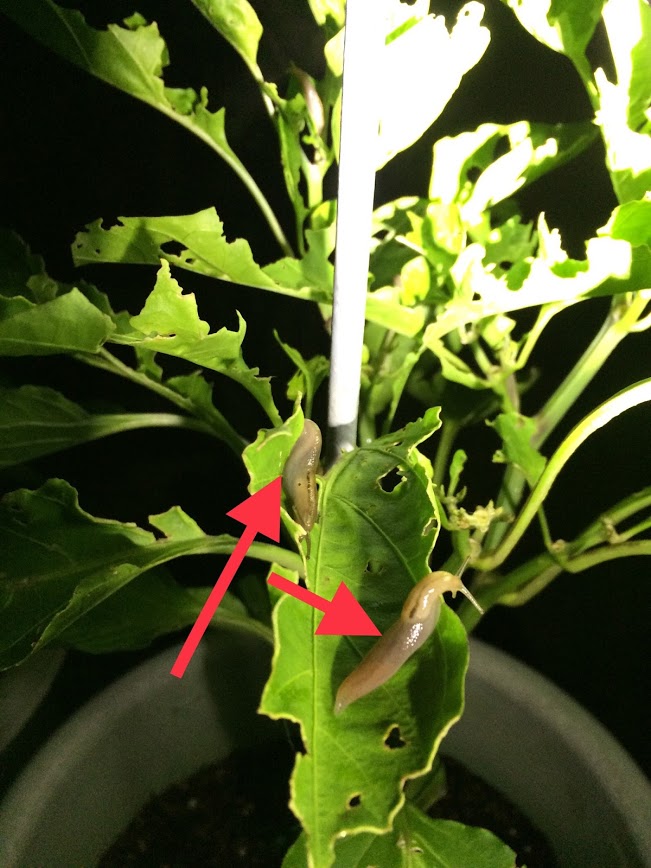 The characteristics of them that tend to eat from outside the leaves.

Since sprout is a favorite, after spoilage, the sprout disappears and the growth ends. 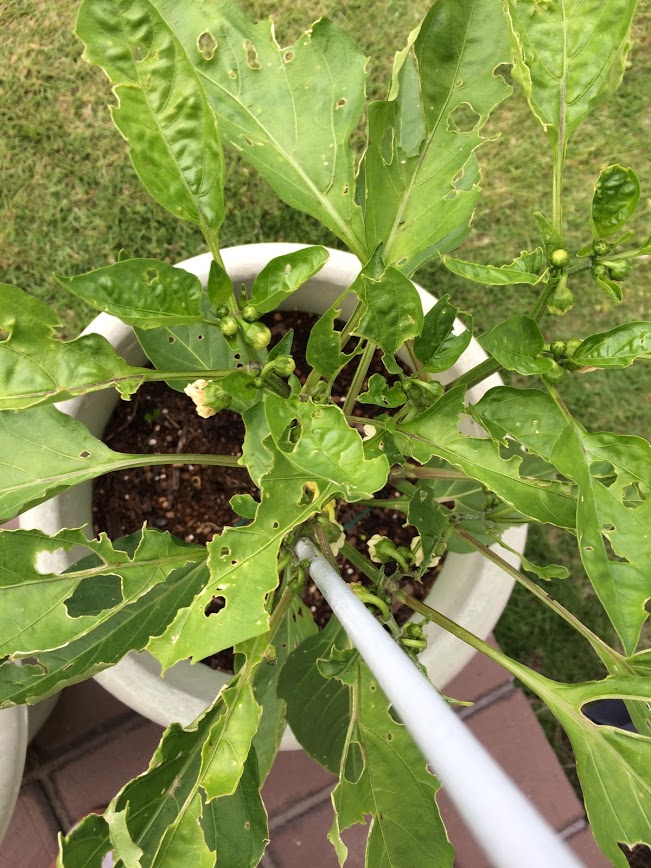 An eggplant whose epidermis has been damaged. 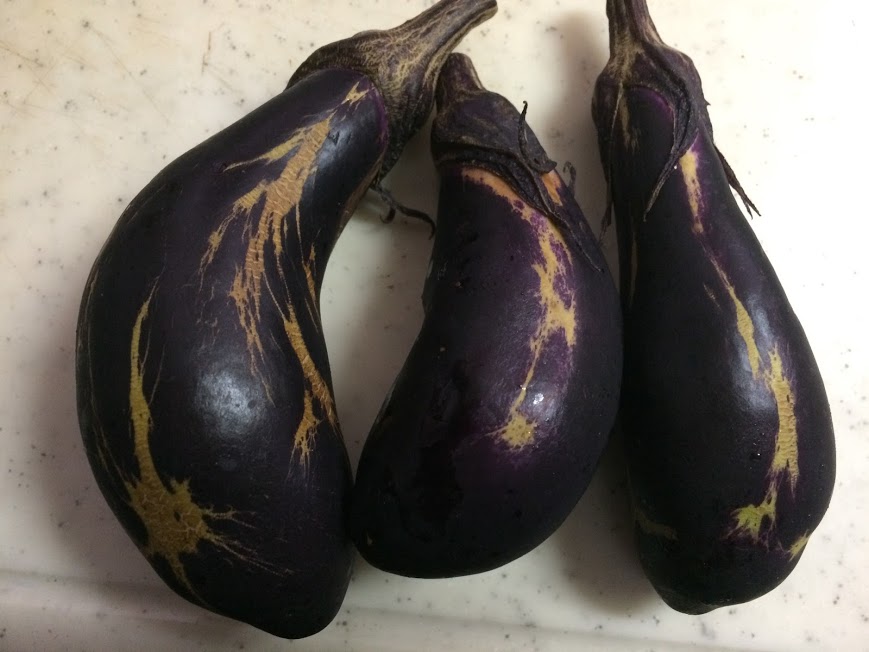 Slugs are climbing smoothly without difficulty. 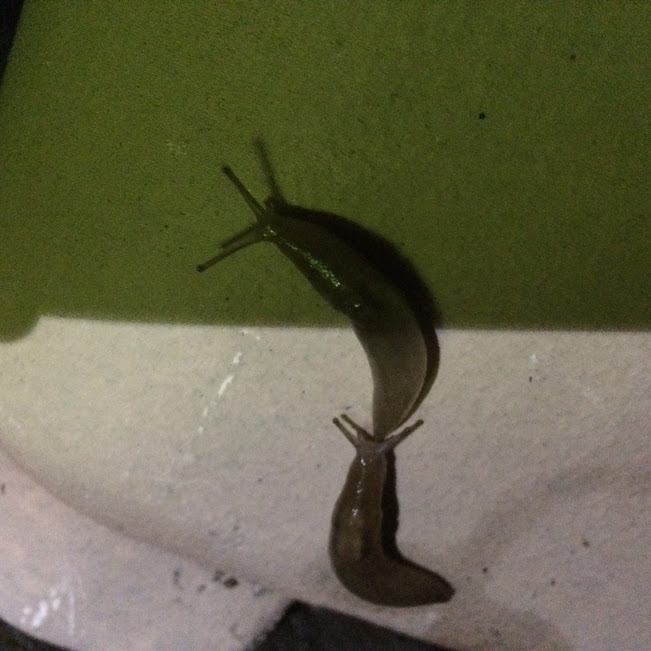 Slugs and stag beetles? Eating together! ? 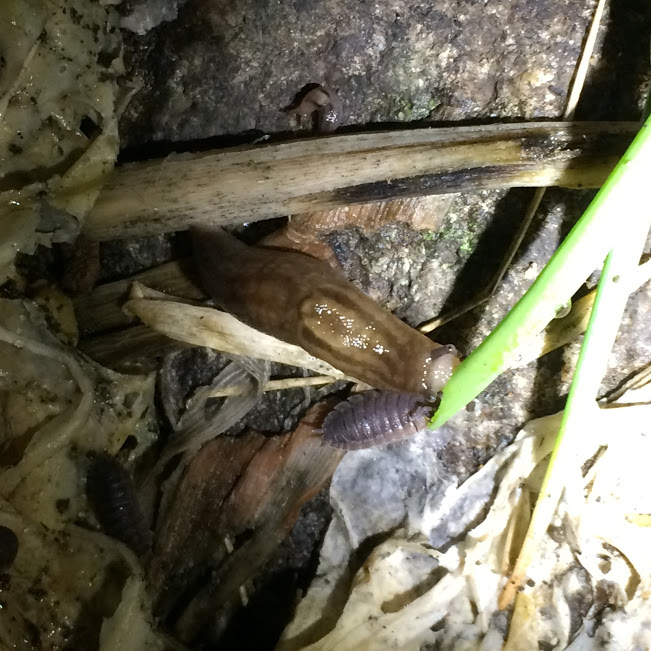 It was just one everyday life of slugs.

Therefore, the drying of mucus is a life threat to slugs, and it is vulnerable to the sun and dryness, so it dwells in humid shade , lives in the bottom of flowerpots, under fallen leaves, in the grass, etc., and acts at night to prevent body drying.

Its body, which looks simple, has its eyes (it is said to be able to judge light and darkness), its antennae (it is thought to be crawling by relying on the smell), its mouth (the inside looks like a file, It has shaving holes.), Breathing holes (lungs), reproductive organs, and has a learning ability (memory ability for about 3 weeks).

They are active from spring to autumn and less active in winter, but the breeding season is from autumn to spring .

There are pictures of slugs, so please be careful if you are not good at it. 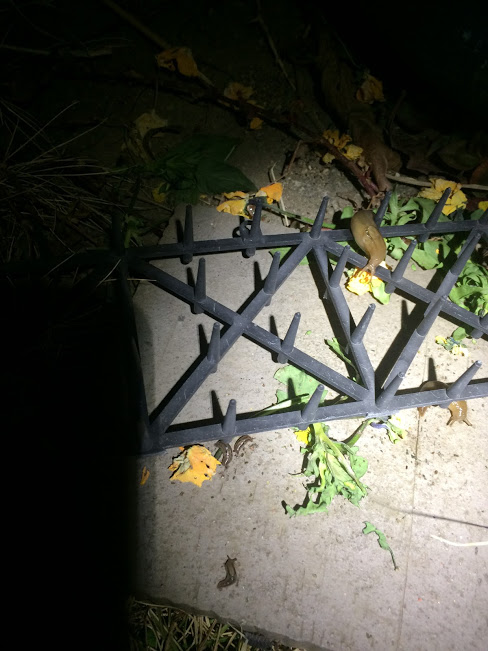 They has both male and female functions, and the two animals after mating can lay eggs independently, and it is also possible to lay eggs alone, and the eggs are semi-transparent like beautiful beads and have a circular shape of about 2-3 mm . 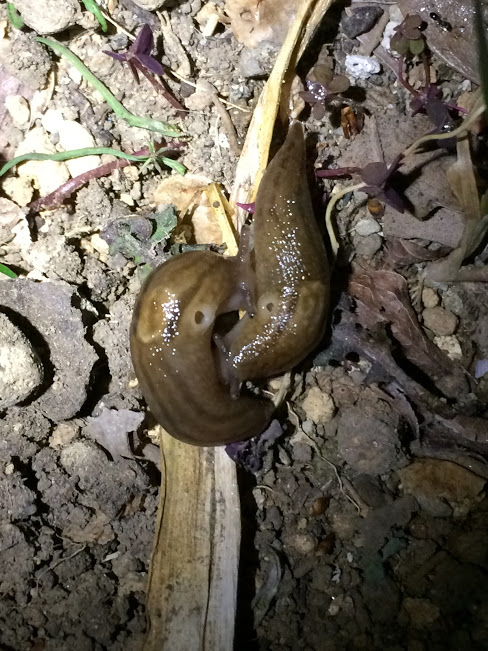 The food habit is omnivorous , and it is considered that sprout of plants and rotting leaves are favored. 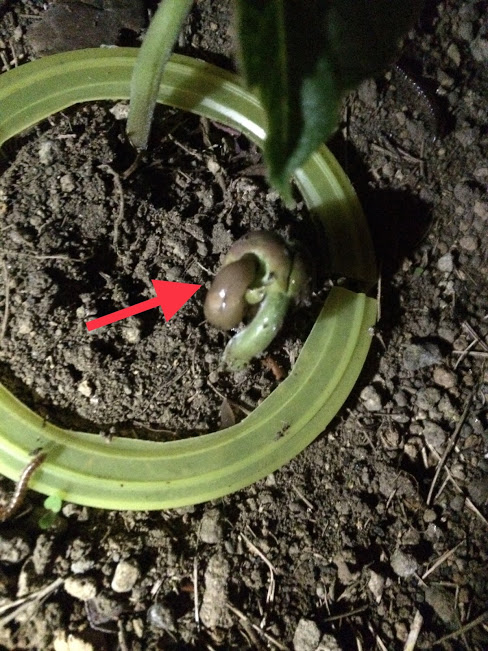 When humans eat slugs and become infected with parasites, they can be fatal and even fatal.

The slug situation that I learned through eight years of observation ...

Mating behavior is continuously observed in the midwinter from October to early April, and late autumn is the most active period .

During the activity period, it became active from around 8 o'clock at night and began to appear from the dwelling place. At 10 o'clock at night, it was at the height of food damage, crawling on the surface of the planter and shaking the head from the root of the plant (check the danger ? ....they have a sense of smell or  slugs are looking for new shoots?) It goes to the upper part of the stem and eats the new shoots .

The surface of the planter creeps up and down without difficulty.

The action does not go backwards but always crawls forward, and when changing direction, heads forward in the direction of travel.

On a plane perpendicular to the ground, slide forward with slug`s head up when climbing and with your head down when descending.

Crawling on the mucus that drains itself to protect thin skin, and when they senses danger, they instantaneously discharges a large amount of mucus and then becomes unable to move, so the mucus that can be drained at one time is limited. I guess.

I gess that if the mucus is drained as much as possible, the mucus cannot be released for a while, and there will be no measure of crawling and no movement.

They  seen in the garden of a typical Japanese private house are 5 to 7 cm long, but as they grow up, they become more slender and learn how to pass through the gap of 4 mm and 5 mm flexibly. However, those that are immature (i.e., slugs of about 1 cm) do not seem to have such techniques.

Eating habits are omnivores, and seedlings and rotting leaves are considered to be favorites.

There are pictures of slugs, so please be careful if you are not good at it.

A slug is eating dead leaves in the planter. 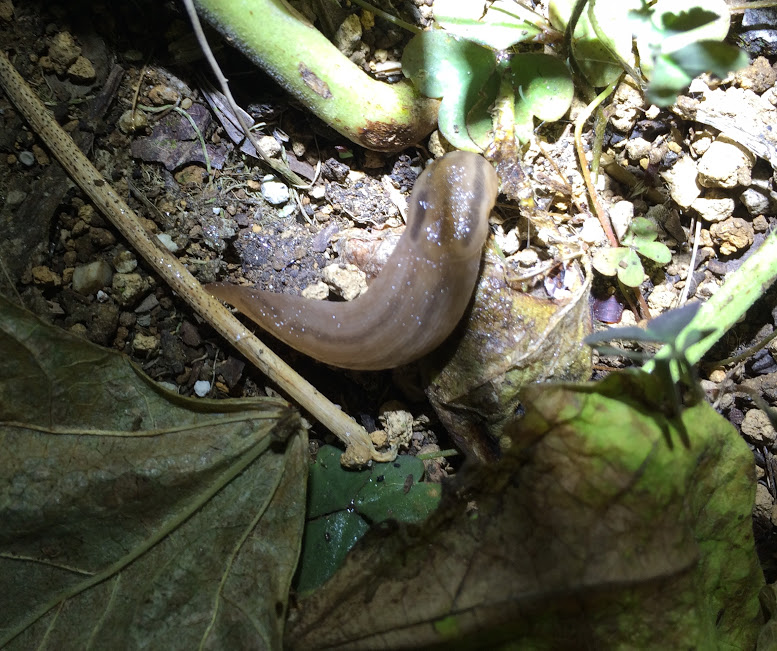 A green bean planter with lush leaves and pods, clinging to dead pods. 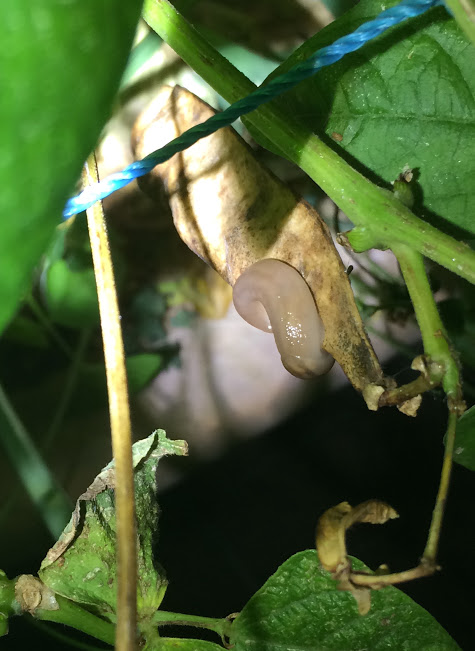 A slug is eating hay around the fields. 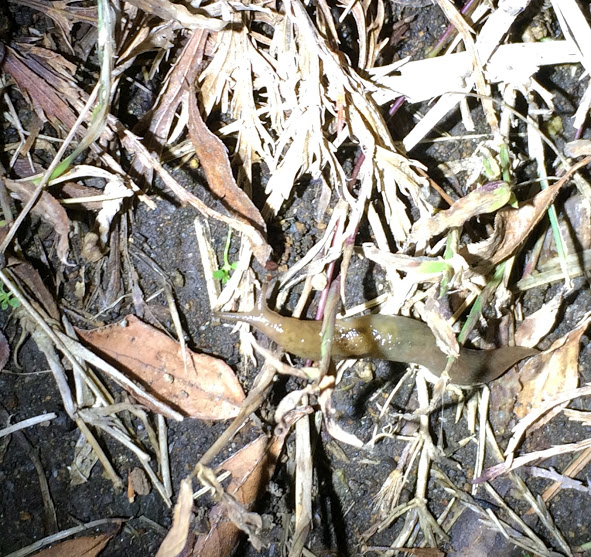 A crowd of dead onions in a place where lush green onions are planted. 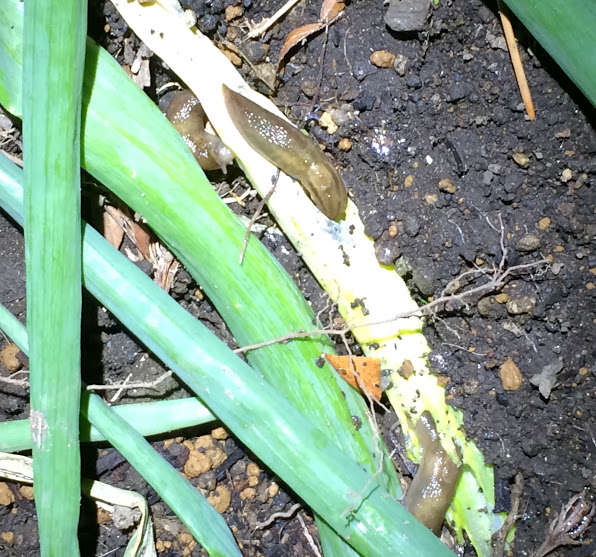 As a place to live, slugs prefer places that are constantly humid, such as the bottom of flowerpots that are always watered, under fallen leaves, under the stones, or on unreachable lawns.

The damage caused by slugs varies from year to year, but this means a difference in the number of slugs inhabiting. Since their  eggs are also vulnerable to drying, drying during the spawning season is a difficult environment for emergence.

They prefer places with high humidity, so we see  a lot   them in the rain and the rainy season.

This mean that they  living in the garden have appeared all at once!?

They  hate drying, so on windy days it doesn't show up during the day or at night.

Both prefer humid places and dislike drying, because the mucus that discharges itself is difficult to dry.If the mucus dries, slugs that crawl on the mucus are crawling. It means that there is no way to do it, which also means a crisis their life.

As a countermeasure against slugs

Not creating a damp area at all times will prevent slugs from inhabiting.

But that's not really possible.

Once a year, pests are regularly sprayed all over the trees in the garden, and in home yards, slugs are not seen .

It looks invincible and vulnerable to medicine.

If you do not want to use chemicals, considering that they prefer hay and dead vegetables, placing dead vegetables outside the growing vegetables is effective as a slug countermeasure, It cannot be completely removed like a drug.

As for food habits, i they are omnivorous and prefer sprouts as they eat and eat, especially while they prefer hay and dead vegetables. 😥

* I tried all things that are said to be effective for slug repellent, such as copper and beer, except for the drug, but the effect was not as much as I expected. (Above all, beer rotten in midsummer, and it was troublesome to clean up afterwards.)

At 9 o'clock on May 13th, I saw two slugs eating duck beetles in the northern part of the garden (bright shade).

Eating inside the shell. 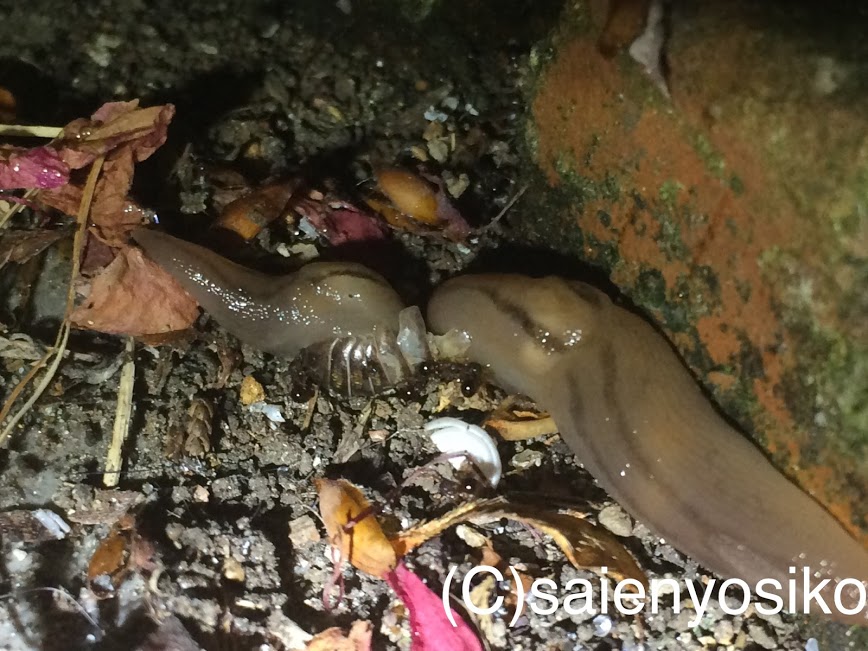 It was taken 30 minutes after the above photo shoot, and they ware  eating  a dung beetle more  deeper part . 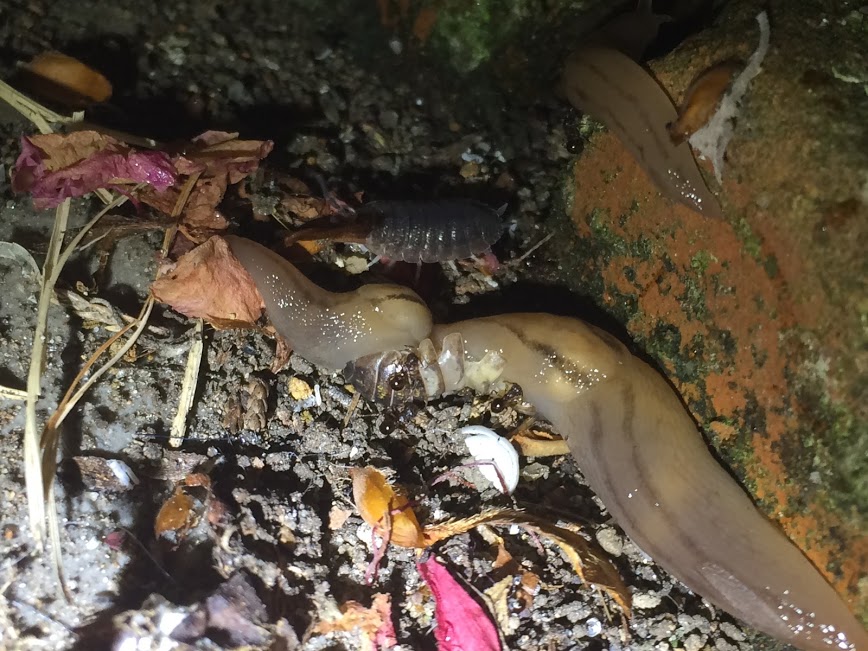 The next morning, the dung beetle shell remained in the same place. 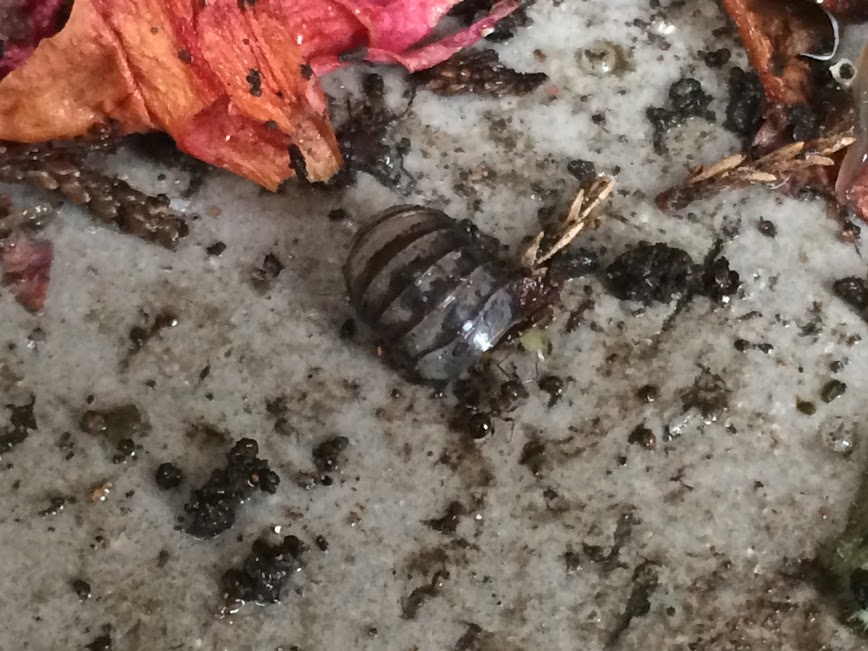 The inside of the above photo is empty. 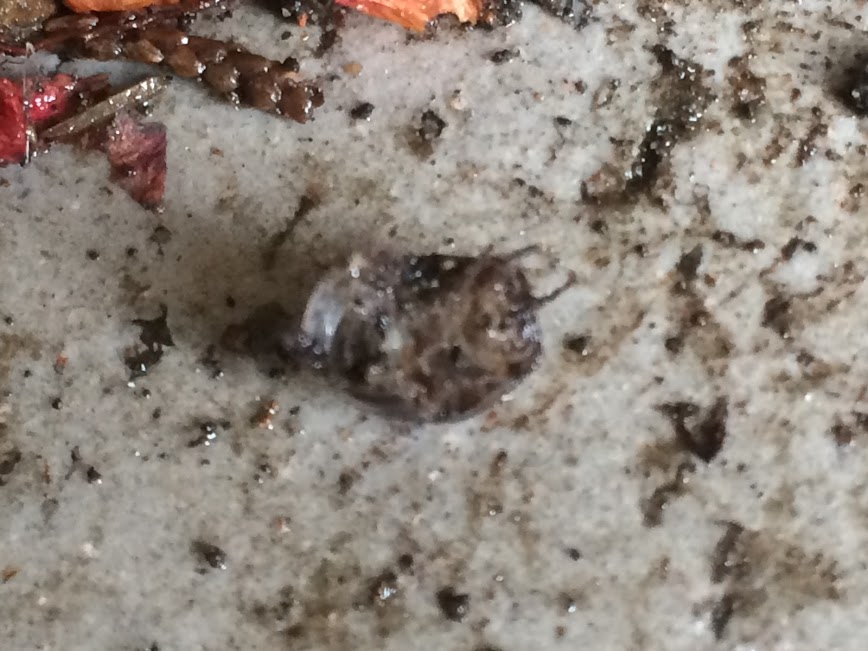 There are several scattered beetle shells around here. 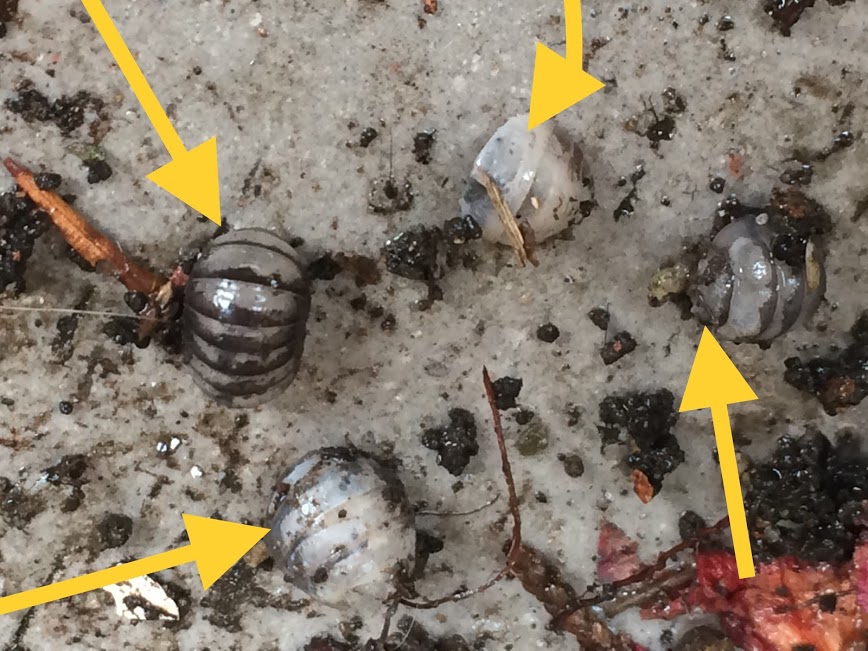 It was a surprising moment because I was observing a creature that had the same habitat as it could be said that the slug was located where the slug was.

Since dung beetles repeat moulting several times, are they preyed by slugs during moulting, or are they normal predation ... Some empty shells are left around and some are already white , we know each is not the same day's shell, but everything is a mystery ~.

Slugs have been too many unknowns for the most troubled bug in a home garden? They are still veiled pests ... not sure.

In order to make vegetables that do not rely on pesticides, I need to know more about pests. I keep a secretary with a slug in my hand with a flashlight every night for eight years. Is still. 💦 (Still slug babies are still cute and they don't feel cute.)

Vegetables that grow from seed sowing with relatively little damage by slugs ...

Relatively, spinach, chrysanthemum, ginger, garlic, ginger, potatoes, leeks, onions, etc., seem to be able to escape from slugs  feeding and be harvested. (In my private field, it is a vegetable that grows and grows and can be harvested for the time being, despite spoilage.)

The leaves in general are often annihilated immediately after germination, but spinach, shungiku, and the like do not feel any damage from slugs.

* Slugs like places that are always moist (shade), so avoiding shading and watering in the morning and avoiding the evening may help to avoid slug eating damage, but midsummer in the evening ,it`s not really possible.

What is a dung beetle?

There are always beetles where the slugs are.

I think this is a preference for similar habitats.

The tastes are also quite similar.

After sowing okra and legumes, the night when there was enough time for the buds to be visible from the ground surface, I saw a flashlight on the few buds that were wearing the buds.

The contents of the seed were eaten.

It was an unexpected surprise.

Considering this, it can be said that the beetle is a pest that damages plants.

It is well known that legume seeds can be eaten by birds, but the beetle is also a must-see, but it is inconspicuous because it is active at night.

At first glance, it seems to be plain because of its night-time eating behavior and its cute, round appearance, but it does damage the seeds of vegetables.

I can't judge by appearance.

Please be careful if you are not good at it because some photos of the beetle are shown below.

The photo shows many bugs on a viola flower. 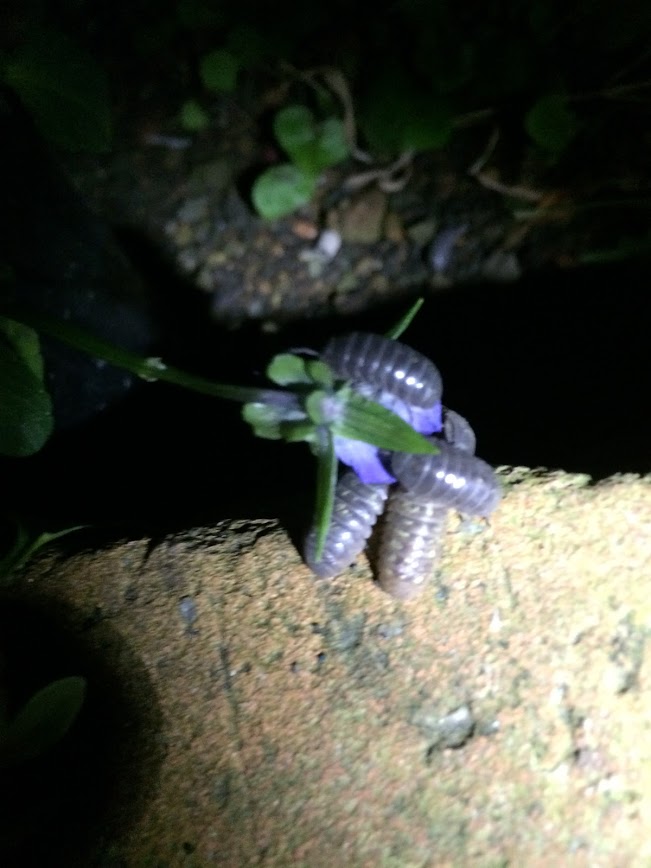 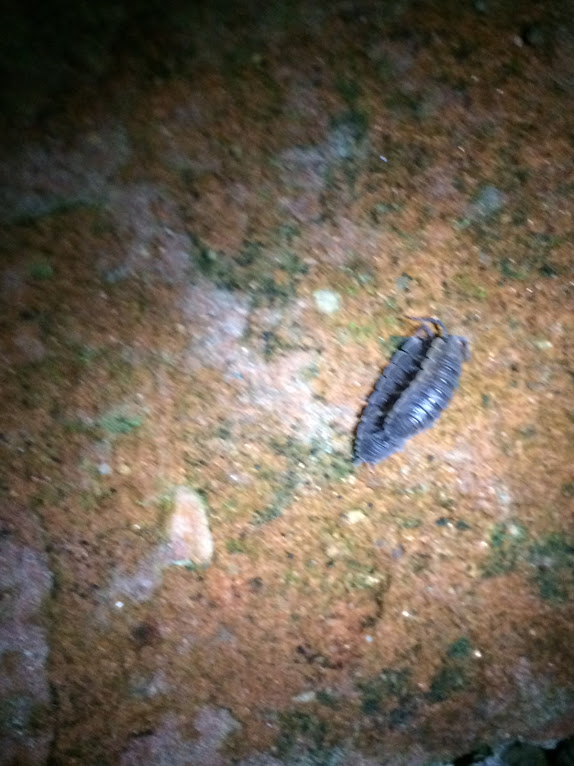 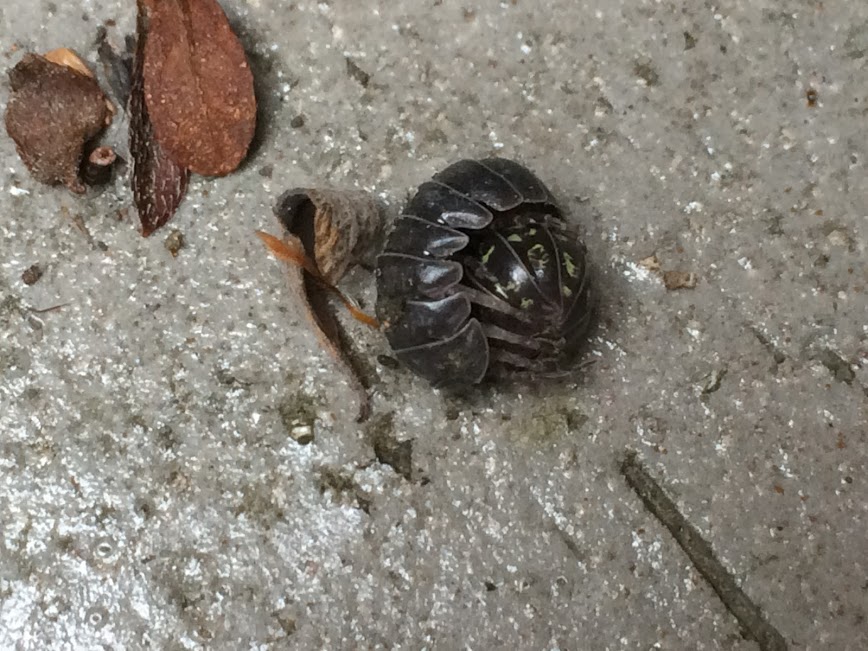 In the garden where the medicine is sprayed once a year, slugs are not harmed, so having these pests is a healthy place where insects can survive.

The presence of pests is a good environment for cultivation of pesticide-free vegetables because there are also praying mantis, ladybirds and spiders that are beneficial insects (eating pests) for plant growth feeding on them. That's right.

I would be grateful if anything could be helpful.

continue`d to the  next episode! 🎎